Projects vol.2
Thorough discussion to select the best,
no matter whom the other party is.
This is what produces the technology to change society.
Tokyo Electron (TEL) aims to be the true number one semiconductor production equipment manufacturer globally. The company has launched successive innovative equipment and technologies that were previously considered unfeasible. Around 25 years ago, Shigetoshi Hosaka, currently Corporate Consultant to TEL, was engaged in the development of products that were considered epoch-making in the semiconductor industry. He truly personifies the TEL engineer. 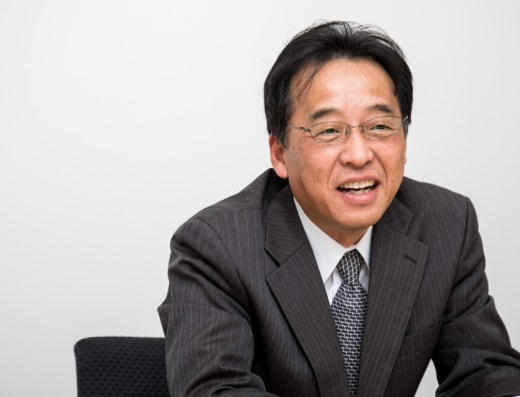 Corporate Consultant Shigetoshi Hosaka
The evolution of semiconductors has been dramatically accelerated by film deposition of one metal.

The evolution of semiconductors has been dramatically accelerated by film deposition of one metal. The semiconductor industry reached a major turning point in the mid-1990s. Popularization of the personal computer exploded, and there was rapid growth in demand for semiconductor memory known as DRAM, which was mainly used as memory equipment in PCs. People sought further technological innovation of DRAM in order to produce computers with greater capabilities at lower cost.
The key to the advancement of DRAM lay in miniaturization.At that time, they were aware that, in the wiring process for DRAM, film deposition of a certain metal dramatically improved their functionality. However, with the advancement of miniaturization, it was difficult to use physical vapor deposition (PVD, whereby metal is physically hammered to deposit a film), which had been used up until then for film deposition on semiconductors, to thinly and uniformly apply the target metal through a minute hole. However, theoretically it was possible with a film deposition method using a chemical reaction known as chemical vapor deposition (CVD). Although semiconductor manufacturers were keen, nobody had achieved it with that particular metal, and those in the industry were aware that it was technically extremely difficult. In spite of this, TEL dared to take on the challenge, with Hosaka responsible for development.

Collaboration with U.S. engineers at acquired companies.Thorough discussion in pursuit of the best.

However, a major hurdle stood in the way before it could be realized. Film deposition of this metal by CVD required a chemical reaction using a corrosive gas material at the high temperature of 700 degrees. A further bother with this particular chemical reaction was that it produced significant quantities of a byproduct that formed particles which greatly reduced the quality of the semiconductors. At lower temperatures, the particles would attach everywhere, soon causing problems with the functioning of the equipment.
Essentially, it was necessary to develop a heater with a high level of heat- and corrosion-resistance and stable temperature control from the gas-supply showerhead, to the vacuum reaction chamber and the exhaust system. There is still no equipment for such mass production anywhere in the world. How can this be achieved?
Hosaka discusses this.
“Each day, we had lively discussions; and intently and repeatedly prepared prototypes and performed verification tests. The company also provided much support in the form of R&D funding. At that point, nobody had achieved success, but technologically, everybody believed that it was possible to realize.”
Research and development into manufacturing equipment responsible for the cutting-edge of the semiconductor industry is truly an endeavor in pioneering unknown fields. If you are overly frugal in regards to investment and human resources, it will not produce innovation. Hosaka explains that this is TEL’s method. Hosaka and the team faced a tough struggle in establishing the technology and, in order to increase the speed of development, TEL decided upon the strategic acquisition of a U.S. semiconductor production equipment manufacturer that possessed key technology in CVD film deposition. Hosaka was also given responsibility for management of the acquired company, requiring him to travel to the U.S. repeatedly.
“Initially, we encountered opposition from their engineers. They did not think they should have to take instructions from an “outsider” from Japan. At this point, I held exhaustive discussions with them to gain a detailed understanding of their technology. Amid the discussions, I made clear that they had certain superior technology, and that TEL was the leader in certain other fields. I was conscious only of what was the best technologically, irrespective of things such as position.
Hosaka remained resolute, no matter how complicated the discussions became, forging ahead in a single-minded effort to realize this unknown equipment. Gradually, the engineers at the acquired company grew to respect Hosaka’s approach.
“At one point, their engineers told me that they had never met a Japanese person who was so direct in saying “No”. I felt that this was a form of compliment,” Hosaka commented, laughing in reflection on those days.

It is not difficult to imagine the difficulties that Hosaka experienced in developing the CVD film deposition system. How was he able to continue to face up to the challenges despite repeated tough experiences?
“My superior gave me full discretion in the field to advance the development in the way I wanted to. I was able to persevere because I was certain that we would be able to realize the technology. As long as the engineers did not give up, there would always be some possibility.”
Under Hosaka’s directions, the Japanese and American engineers combined their knowledge and were able to develop a corrosion-resistant CVD system with suitable temperature control to ensure that the byproduct of the reaction did not become attached. In the treatment of by-products, which was a problem, a novel mechanism for depositing by-products at a stretch by arranging a low-temperature portion in the apparatus was devised.
This was how TEL was able to be the first to launch the much-anticipated CVD film deposition equipment onto the world market in the late 1990s. As a result, miniaturization of DRAM advanced rapidly, providing a significant boost to the spread of personal computers and digital devices, and the acceleration of communication. Were we to retrace the reasons that we can readily access smartphones today, we must recognize that CVD film deposition equipment made a significant contribution. Indeed, Hosaka and his colleagues developed technology that has had a major impact on our daily lives.
Later, Hosaka was appointed to oversee the corporate R&D divisions as a whole, but he always remembered the management that he worked under, and gave his team members great leeway in their work. “At one time, some members suggested that they would like to introduce AI to semiconductor equipment. In those days, AI was not attracting as much attention as it does now, and even I was skeptical, but I decided to listen to their ideas. Following rigorous discussion, I realized that it was very promising technology, and put them in charge of its development. If certain technology would bring value to the world, there is no reason that we should not tackle it. they started to produce results and now TEL holds important patents concerning AI,” Hosaka explains proudly.
In the past, Hosaka always encouraged engineers responsible for projects with the following message. “Think about it by yourself before deciding. But if you have any trouble, let me know.” He believed that if engineers gave up, that would be the end.
Hosaka’s spirit has been inherited by young engineers, which is leading to the emergence of new innovation.

*This development project took place approximately25 years ago. We have introduced past projects because the most recent development projects involve confidential information, which cannot be disclosed. But our approach to development is the same today as it was in the past. We hope that this gives you an understanding of the attitude of developers towards development.