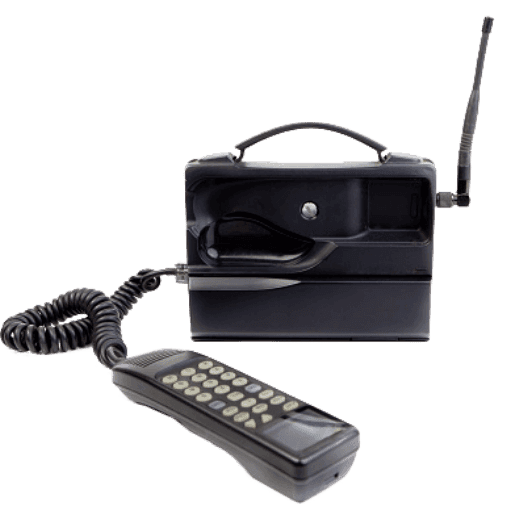 The dawn of mobile phones
The telephone was invented in the 1870s and services were introduced in Japan in the 1890s. Then, after World War 2, the “black telephone” began to spread to every household during Japan’s period of high economic growth.
The 1980s saw the launch of the shoulder telephone. However, they contained a battery weighing around 3 kilograms, with continuous talk time of some 40 minutes. The base fee was tens of thousands of yen. Consequently, the only people to use them were journalists and the like. In order to allow anyone to communicate from anywhere, what was needed was the development of a small, light, low-cost product. 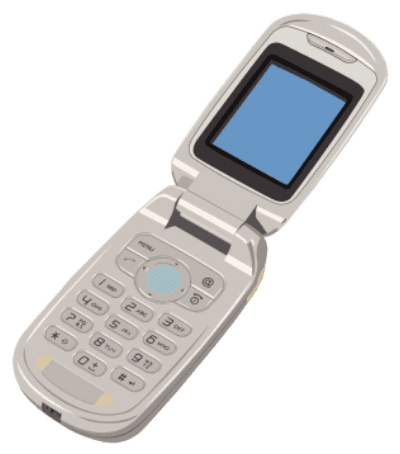 The astonishing development of the mobile phone
From the 1990s onwards, mobile phones have shown remarkable progress, becoming smaller and lighter, and gaining many diverse functions A major factor in their emergence has been large scale integration (LSI), allowing the high-density integration of a large number of semiconductors.
LSI functions as the CPU that performs calculations and as memory equipment, performing processing at high speed with low power consumption. As a result, in addition to regular telephone conversation, they enabled recording of data, display images, photography and videography by camera, data transmission and so with in one small mobile device. 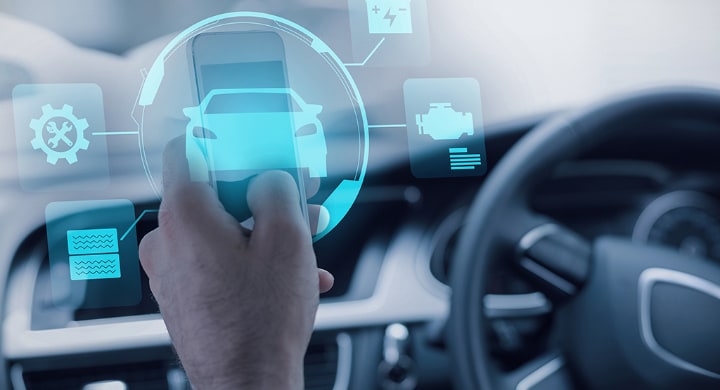 Future devices
Since 2013, smartphone sales have exceeded flip phones in unit numbers. This is also related to the evolution of semiconductor technology. For example, the emergence of large, high resolution displays and the significant increase in data that can be processed and recorded. This has been due to further miniaturization and improved functionality of semiconductors whereby more information can be processed more quickly in a smaller space.
In the future, we are likely to see further diversification of devices.
For examples, devices with specialized artificial intelligence (AI) processing, and neuromorphic devices, that mimic the human brain even more closely. Quantum devices incorporating quantum computing and quantum sensors. In the field of displays, we will see VR enabled by head-mounted displays, and even more advanced 3-D hologram images. Also, thin displays that can be bent like paper. In the medical field, hopes are held for adoption in many devices. For example, there is growth in devices that can be implanted in the body with low impact.
However, the amount of energy consumed by semiconductor devices in cloud computers and the like today is extremely high, and significant energy conservation is a key issue. We look forward to the emergence of various non-volatile devices and power devices made from new materials. Through such evolution of semiconductors, we will see the emergence of a new and more comfortable world.
The semiconductors that support high speed telecommunications technology
We cannot discuss the evolution of devices without mentioning improvements to telecommunications technology. Presently, a large number of devices are constantly connected to the network, and the volume of data handled worldwide is said to have increased more than 10-fold in 10 years.
The fact that we are able to exchange such large volumes of data is thanks to the widespread construction of large-scale data centers, and due to the evolution of semiconductors and of semiconductor production equipment. In the future, we will realize edge computing, bringing large numbers of servers closer to the location of the user, and the increase in communication with cloud computers will require higher speed transmission. Improved functionality of semiconductors, which holds the key to future improvements to transmission speed is one of the important technological challenges essential in the era of IoT.