TEL’s Future vol.2
Etching technology advances are
key to the near future with semiconductors
Recently, the semiconductor manufacturing process is experiencing the greatest technological innovation in the field of etching. Etching is a process to remove unnecessary parts around a circuit burned on the wafer surface. Etch systems’ market share has doubled over recent years, also in the semiconductor manufacturing equipment market. To increase TEL’s product competitiveness, a new R&D building has been constructed at the company's Miyagi site, which develops and manufactures etch systems. What lies behind these expanding needs? What are TEL’s strategies and tactics to tackle the market?
An interview with 2 men in etch systems’ departments conveys the enthusiasm at the leading edge. 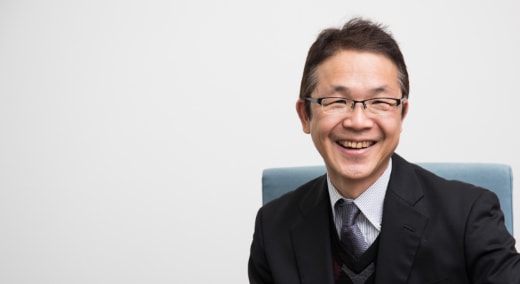 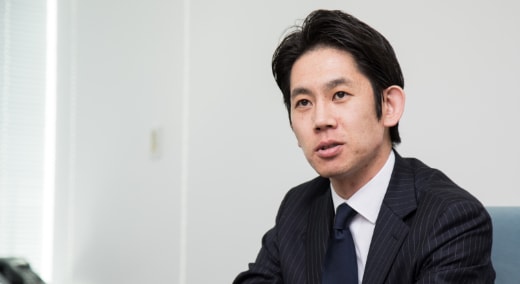 Higuchi explains that “There is a shift in core technology for producing high-precision semiconductors from exposure to etching technology.” He speaks from his experience as an engineer and familiarity with etching technology.
“Previously, miniaturization was the key to improving semiconductor performance. Designing patterns using smaller lines enabled higher density circuit integration. "
Until now, it was enough to rely on exposure to light to reduce the line width. However, conventional methods reached their limit when we needed to design circuits with widths as narrow as 1/3 or 1/4 of the wavelength of light. Multi-patterning technology was developed to achieve miniaturization fully leveraging film deposition and etching process technologies.
Lines drawn by a single exposure are refined further by dividing into multiple patterns to achieve miniaturization.

There is another reason for the focus on the etch systems. According to Higuchi, as data traffic grows, development of three-dimensional semiconductor devices is advancing to handle the greater amount of data saved.
“The spread of smartphones and PCs is resulting in more data being stored in the cloud. Stacking is developing three dimensionally: vertically rather than horizontally, to facilitate further integration.”
In the past 2 years, stacks numbers have almost doubled, advancing to around 90 layers. As the number of layers increases, the number of film depositions, etching time and the number of etchings also increase, requiring more equipment.
“Not only has the market expanded, but the technology is also more sophisticated. Atomic Layer Etching (ALE) is becoming increasingly necessary, in particular for logic devices used in arithmetic processing, to slowly etch multiple atomic layers.” (Kamiuttanai)
Once 5G is introduced, demand will grow to handle even greater communication amounts and speeds. This includes server-side storage to store data, and devices that facilitate on-time processing. Both are certain to require greater memory, and therefore semiconductor arithmetic processing functions will become more and more necessary.
This will result in even greater demand for etch systems.

POINT2
DNA that seeks out the most difficult technology.

What strategy is TEL adopting towards the growing needs in the etch systems market?
“Making the same product as rivals is not in TEL’s DNA,” asserts Kamiuttanai. “We believe in differentiating our products by performance and creating products that are seen as necessary, even at a higher cost. We do not engage in price wars.”

For this reason, TEL always opts for the most difficult process.
“This is because difficult or problematic processes produce the most outstanding technology. This is our tactic to deliver the greatest added value, to be aggressive in the market, and gain profit as an appraisal of legitimacy. ”
TEL develops leading-edge technology faster than anyone else. Consequently, the sales division must determine the gravity of an issue for the customer, the development time required, and its priority for the business.

“Semiconductor manufacturing equipment manufacturers hold the key to semiconductor technological innovation. Many companies ask to work with us, but it is meaningless if it will only produce results similar to our rivals, as it leads to discussions to lower the price. Because of the number of processes even in etching, TEL can identify those processes which its technology is suited to.
It is not uncommon for us to decline a proposal if we decide that differentiation in performance cannot be achieved.”’
TEL’s strength lies in its involvement in almost all of the semiconductor manufacturing processes.

Higuchi explains that “There is an increase in process integration that resolves issues by combining multiple processes, such as etching and film deposition to produce a set pattern.
The idea of combining technologies handled by separate division is also advancing. Leveraging technology developed in other business units will improve development speed.”
In dealing with customers, Kamiuttanai always considers whether the relationship is win-win. “TEL believes in customer first, but this cannot continue without profit for TEL. Also, customers will not choose TEL unless it is a win for them too. This also applies to suppliers. I believe that win-win is a prerequisite for maintaining a good relationship.”

POINT3
A corporate culture that entrusts matters to those with the best understanding.

One reason for the success of the strategy of producing the highest value-added faster than anywhere else lies in TEL's corporate culture of prioritizing the judgment of its most knowledgeable people, regardless of their authority or position.
“It is better for a knowledgeable person to make decisions, regardless of their level of authority, than a person who has authority but little knowledge. That is more correct. In this regard, TEL applies commonsense,” says Higuchi.
For example, Kamiuttanai, who is the equivalent of a section manager in any other company, controls an annual budget worth roughly 30 billion yen. He believes that the most interesting aspect of working at TEL is the sense of scale in the monetary values handled.
Unlike other companies, employees in their 6th or 7th year are entrusted with development lines expected to produce an investment effect of 20 billion yen or more.
However, Higuchi adds that “There is a difference between leaving it up to someone and handing them responsibility.”
“We allow the front-line to make decisions, but placing too much stress on them will not result in good work. The manager must check for mistakes and take the final responsibility.”

Creating an atmosphere where everybody feels free to talk also supports the achievement of our strategies.
It is normal to discuss matters with executives by email or telephone, even asking for help according to the circumstances. Direct access to the necessary people is faster and more certain. We are not expected to only speak to our immediate superiors.
TEL offers many opportunities for employees to go abroad and gain experiences from an early stage. Kamiuttanai recently returned to Japan after working at 3 Asian sites for about 10 years. Many sales agents are stationed in China, Taiwan, South Korea, and the U.S., and it is even possible to be sent abroad from the first year of employment.
TEL’s Corporate Philosophy states “We strive to contribute to the development of a dream-inspiring society through our leading-edge technologies and reliable service and support.” “Semiconductors are related in controlling all kinds of devices in the world. The development of IoT will allow data transmission functionality to be added to each machine in any factory, which can enhance productivity and help conserve energy. People around the world can access information via smartphones, and when communication speed increases with 5G, it can even contribute to remote medical services. The scenes where semiconductors can be used in solving problems around the world is limitless. I believe that TEL's business will continue to expand for as long as we can make a contribution.” (Higuchi)